New research reveals that a clear majority of Ukrainians in Donetsk oblast (region) are watching both Ukrainian and Russian TV news, although trust levels of the population in Ukrainian TV is low. Around the rest of the country, people prefer to get their news from Ukrainian TV channels. The survey in 10 regions of Ukraine was commissioned by Internews and conducted from April to June 2014 by marketing and research firm InMind for the USAID-funded Ukraine Media Project (U-Media). Television is still the most popular source of news for 89% of people in Ukraine, and the Internet continues to beat print media and radio in terms of popularity among news consumers: 46% of those surveyed search for news on the Internet, while 29% get their news from print media, and 29% listen to news on the radio.

In an attempt to gauge the impact of the “Information War” currently being waged in the restive East, Internews asked respondents how much they consume Russian TV news. In Donetsk region, 62% of respondents said they watched Russian TV channels, and 57% trusted the Russian TV channels. Also in Donetsk, 77% of respondents said they watched Ukrainian news, but only 24% trusted what they saw on these networks. In Kharkiv and Odessa, only a minority reported watching Russian TV news, but the trust level for both Russian and Ukrainian TV news was low.

The following chart presents the degrees to which all respondents, including those who do not watch TV news, trust the accuracy of news coverage on television: 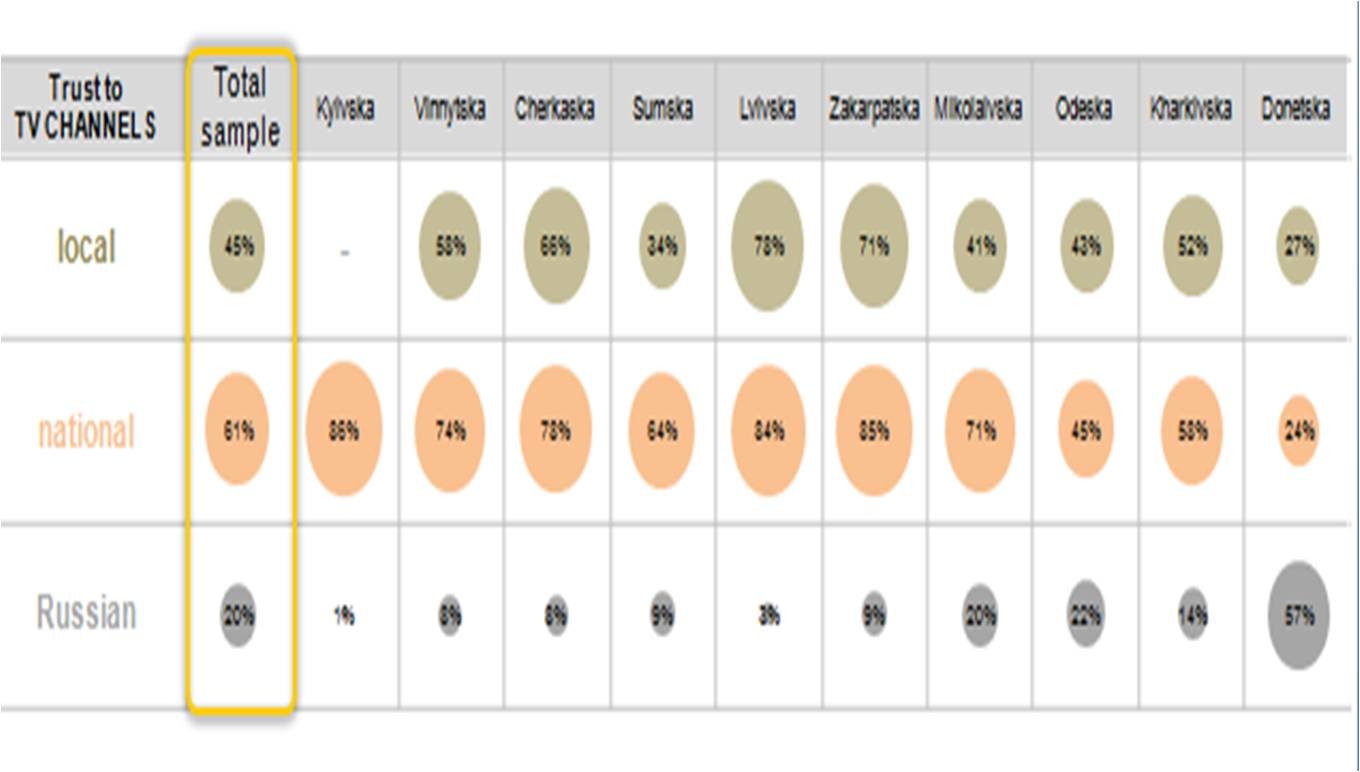 Print media continues a steep decline as a source of news for Ukrainians; 29% of respondents read papers, down 11% from the 2012 survey, while radio is holding steady. The use of the Internet, for any purpose, increased from 60 to 67% since 2012, and 62% of those who use the Internet said they read news online. The most popular information websites are the news aggregators Ukr.net (31%) and Yandex (11%), followed by the social network VKontakte at 11%. Korrespondent.net tops the list of news websites (8%), while the Hromadske.TV online service, after just seven months online, was visited by 5% of survey respondents.

InMind surveyed 3,007 citizens in 10 regions of Ukraine from April to June 2014. The sample consisted of respondents in cities with populations of 50,000 or more.

More findings are available in the English and Ukrainian survey reports on the U-Media website at http://umedia.kiev.ua/dosldzhennya. Use of the research data is permitted only with reference to the “USAID Internews U-Media project” and “InMind”.

This research is made possible by the support of the American people through the United States Agency for International Development (USAID). The research findings are the sole responsibility of Internews and InMind and do not necessarily reflect the views of USAID and the United States government.

PLEASE USE THAT LINK TO ACCESS THE FULL REPORT of U-Media Audience Survey Report 2014 in English - inmind_internews_-media_report_2014-english-edit.pdf [1,5 Mb] (cкачиваний: 33)