Coverage of events in Ukraine by Russian mass media

Monitoring is carried out by NGO "Telekritika" with support of USAID, provided through “Internews Network".

Informational anti-Ukrainian operations by Russia took place throughout the modern history of Ukraine. However, unprecedented in scale anti-Ukrainian propaganda in Russian mass media unfolded before the Vilnius Summit in the fall of 2013. Since the beginning of the Maidan in Kyiv after beating of students the amount of Russian propaganda, and thus fake information and manipulation of events in Ukraine, only increased.

First of all, state TV channels "Russia 1" and "Russia 24" have become major propagators. However, the propaganda became a part of the editorial policy of private media too, especially of those that are fully or partially funded with "Gazprom" money or committed to Putin's oligarchs, particularly NTV channel or newspapers "Komsomolskaya Pravda", "Izvestiya" and others. Impact on Western Anglophone audience is made by channel Russia Today, and numerous experts-lobbyists who appear in the Western media.

In a few months Russian mass media have made the main enemy out of Ukrainian "brotherly people".

Anti-Ukrainian propaganda in Russian mass media has the following features:

1. Excessive amounts of information about Ukraine in the Russian mass media. This information displaces any other information, including the events in Russia itself. Thus, Russian television distracts attention of society from internal problems in the country. However, creating an image of an external enemy (which in this case is Ukraine and all things Ukrainian), it mobilizes people, uniting it around the figure of Vladimir Putin (who has to become a peacemaker and savior), that is confirmed by the growth of his rating.

To illustrate, here are some of the figures on the number of allotted time for Ukrainian events in the Russian news.

2. Use of hate speech and rhetoric of war. Task is to demonize Ukraine and Ukrainians in the eyes of Russians and all over the world

3. Use of lexicon that legitimized the invasion of Crimea by Russia, and now legitimizes the illegal terrorist groups in the East

The main task of the Russian propaganda today is to legitimize in the minds of Russians subversive and criminal groups operating in eastern and southern Ukraine as full spokesmen for interests of population of these regions. A simple trick is used for this: representatives of these subversive and criminal groups are given representative titles, such as "people's governor" or " President of the Donetsk People’s Republic".

In Crimea, Russian invaders were called "Crimean self-defense". Now subversive and criminal groups in the East are called “militias” by Russian propaganda.

4. Spreading outright lies about the situation in Ukraine. The main purpose is to discredit the country in the eyes of the international community. One of the the most vivid examples is a story of Arkady Mamontov on TV Channel Russia 1 on the construction of concentration camps in the Ukraine. A journalist called concentration camps the sites where there is a construction of temporary detention facilities for illegal immigrants that are being built under an agreement between Ukraine and the EU (link to a story - https://www.youtube.com/watch?v=FAjPfq7SBpw )

Interpretation of information about Ukraine in Russian mass media per topics:

Situation in the East

As stated above, the main task of Russian mass media in the context of developments in the Eastern Ukraine is a legitimation of subversive and criminal groups in the eyes of population and presenting Ukrainian authorities as "The Chastener" that is fighting with its own people. Russia needs a destabilization of the situation in the East also for questioning a legitimacy of the presidential elections in Ukraine.

Host: "The closer the election day, the less shy punishers are in choosing targets. Firing by mortar and howitzer now not only at residential areas, but also at schools and even children playgrounds". And then follows story "about life under fire". 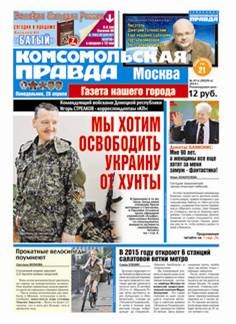 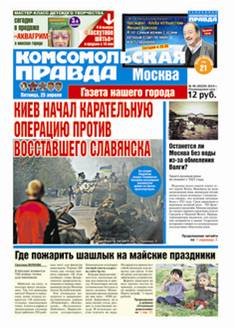 Russian mass media focused on the topic of "destruction of the state", "destabilization in Ukraine", “anarchy and bandits’ lawlessness” and, of course, "intimidation and threats against Russian residents of Ukraine", and, as a result, "illegitimacy of the new leadership" and "illegitimacy of future elections". Topic of a split of Ukraine and the impossibility of its existence within the defined borders began to unwind since last year. Here is an example:

“It is important to realize that the "final draw" on Ukraine as a whole (entirely) between Russia and Europe is impossible. The conflict around the Association Agreement has clearly showed that. Costs of "final choice" are incompatible with the very existence of Ukraine in its current form”

In parallel, there is ongoing work in social networks. “Ukraine has never had its statehood'”, “Khokhly [Ukrainians] can’t have its statehood at all'' - these are some of the theses that are being actively spread over Internet.

Russian propaganda constantly emphasizes on the impossibility of holding elections in the East. There are regular reports on worsening of the situation on the eve of elections in Ukraine. All of this in a complex allegedly has to question the legitimacy of elections, and thus give reasons for Russia not to recognize those.

Here are just for an example the latest titles on the Russia Today website by tag "Elections of the President of Ukraine 2014".

" In Kyiv on the eve of the election law enforcers seized the newspaper’s editorial office that criticized the new Ukrainian authorities " (22.05.14, 12:48)

Nationalist organizations of Ukraine declared their intention to unite (22.05.14, 11:19)

Vladimir Putin: Russian troops were withdrawn from the border of Ukraine on the eve of presidential elections (21.05.14, 15:11)

Ministry of Internal Affairs of Ukraine: In some regions of the south-east it is already  impossible to hold presidential elections (19.05.14, 12:27)

But it is a continued tendency; Russia questioned the holding of presidential elections in Ukraine from the very beginning when they were just announced.

«Hosted by Maria Bondareva: In the south-east of Ukraine there are mass demonstrations of local residents who demand a special status for the Russian language and integration with industrial enterprises of Russia. This was stated today at a press conference by the leader of Russian Communist Party Gennadiy Zyuganov. As to presidential elections in Ukraine, he said, the prospects to hold those honestly are rather vague.

Gennadiy Zyuganov, chairman of the Central Committee of Russian Communist Party: In the present circumstances it is impossible to conduct honest and decent election in Ukraine. When the Electoral Commission obeys people with guns in their hands, it would write any result which is was ordered».

"— Issue of legitimacy the elections will arise necessarily. Already it is clear that the electorate will not be 100% involved in the election campaign. The problem is that the West is extremely interested in achieving any result, because they need the legitimacy of the new government. It is unclear whether there will be  second round of voting. Judging by the figures, which are pronounced, it can not be avoided - said Ambassador Extraordinary and Plenipotentiary, L.L.D. Vasiliy Likhachev".

Indicative in this sense is the statement of Vladimir Putin, which was actively spread by Russian mass media.

Putin answers the question: «If elections are held, how Russia will build a relationship with the Ukrainian state?"

Putin: "Wouldn’t it be easier to hold a referendum first on all the main topics , the referendum on the constitution, adopt and then on the basis of the constitution elect the president and the parliament and further to form the government. But the current Ukrainian authorities with the support of European countries , the United States took a different decision . It will be very difficult for us to build relationships with the people who come to power on the crest of prolonged punitive operation in the South-East of Ukraine and are hindering the work of press. And not just hindering and they are behaving more and more aggressively. This, of course, in terms of legitimation and in terms of objectivity and the results will cause us more and more questioning".

NTV Channel made a series of propaganda and outright manipulative films about Ukrainian politicians, including Arseniy Yatsenyuk, Petro Poroshenko, Yulia Tymoshenko, Oleksandr Turchynov and Igor Kolomoiskyi. All films are built on false charges of politicians ( e.g. Poroshenko is accused that his chocolate is poisonous and contains "benzopyrene, which causes cancer and by the degree of danger is in line with mercury, strychnine and polonium!"; Tymoshenko is blamed for allegedly having Jewish roots ) and evaluative abusive judgments (e.g. , Timoshenko is called "zechka" [convict] throughout the entire film).

Example: in the news program "Vesti" (Russia 1) of 21.05.14 in several stories there were accusations of Ukrainian mass media, including that "Ukrainian mass media continue to depict the image of enemy." Besides, there is a separate story, which provides a commentary of Russia Today staff Graham Phillips (British citizen who was detained in Mariupol, Donetsk region by National Guard soldiers for shooting of secret military sites, later SBU announced its release and transfer to British Consul). Phillips says literally the following:

In parallel, there is a fierce critic of Russian journalists who allow themselves to criticize Kremlin's position on Ukraine. Thus, in the above-mentioned news program "Vesti" there was a separate story was dedicated to criticism of "Echo of Moscow" and its editor Alexei Venediktov, particularly because of the blog of Oleksandr Horobets on  "Echo of Moscow" website, titled “What the staff of LifeNews was actually doing near Kramatorsk. Video evidence”. (follow the link to watch - http://www.echo.msk.ru/blog/jura777/1324262-echo/ ). Thus, "Vesti" called position of "Echo of Moscow" "skotstvo and betrayal." As to journalists who work there, it’s said like this: "These people do not deserve to be called journalists, they are traitors".