Internews is seeking candidates for the position of Finance Manager

Internews` Ukraine Media Project (U-Media) supported by USAID invites media organizations to submit grant proposals to a small grants competition. Within the small grants competition Internews will consider project proposals with the maximum budgets of $10,000 for up to 6-month projects focusing on U-Media`s priority types of activities. Deadline for submission of proposals: 23:59 Kyiv time on 30 December, 2015.

The Academy of Ukrainian Press invites journalists and representatives of international organizations to attend presentation "TV news monitoring survey for September 2014" to be held on October 16, 2014, at 10:30 in “Creative Space 12”, 2nd floor, 10\2 , Mykhailivskyi line

Internews condemns the attacks directed at journalists attempting to report on the Euromaidan protests in Kyiv, Ukraine. According to local media organizations, 50 journalists and media workers have been injured since the protests began in response to the Ukrainian government’s decision not to sign Ukraine’s association agreement with the European Union in Vilnius, Lithuania on November 29.

The objective of the SIRU project is to improve Ukrainian citizens’ participation in public life and decision-making by increasing the quality and production of investigative reporting made available to them. To achieve this objective, the project supports Ukrainian investigative journalists to produce a nationally broadcast television program examining key issues of public importance – including good governance, economic development, environmental protection, and social justice. Through the project, Ukrainian journalists also gain access to world-class training from leading investigative journalists, including from Canada’s public broadcaster, the Canadian Broadcasting Corporation. The project is implemented by Internews, and funded by the Government of Canada’s Department of Foreign Affairs, Trade and Development.

The Slidstvo.info (Investigation.info) television program, as the main activity of the project, was launched in May 2014. It is produced by investigative journalists from Kyiv, Rivne, Simferopol and Mykolaiv, and led by the investigative journalism unit of the online broadcaster Hromadske.TV. Currently, the program is broadcast every two weeks on Hromadske.TV, the national state TV network First National, and several regional broadcasters, to a large and growing audience.

As of October 8, 2014, the Slidstvo.info program will introduce its new visual identity and move to a weekly broadcast. In October, the program will feature investigative reports on the 2014 Parliamentary Elections campaign. 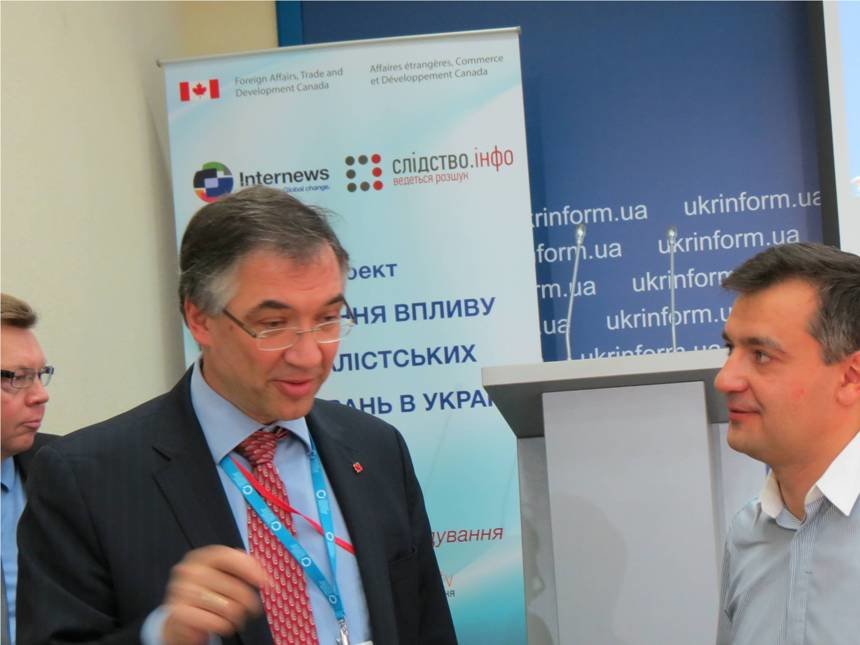 As reported by Slidstvo.info’s producer and lead journalist Dmytro Gnap and Slidstvo.info reporter Anna Babinets, the investigative reporting program was instrumental in bringing to light several wrongdoings that led to the replacement of Maksym Goldfarb, the Head of the Internal Audit Department of the Ministry of Defense, and to the launch of a criminal investigation of the Deputy Head of the Anti-Terrorism Operation, General-Mayor Vyacheslav Nazarkin.

Wayne Sharpe, Director of Internews Network in Ukraine, and Roman Waschuk, Canada Ambassador Designate to Ukraine, discussed the importance of high-quality, impartial investigative reporting to building a democratic society and informing citizens so they can hold their leaders to account.

Wayne Sharpe: “The Ukrainian media played a critical role reporting the Euromaidan protest movement and exposing the corruption and violence of the Yanukovych regime. A free and professional media is needed now to ensure the new government makes good on promised reforms, fights corruption, and serves the people who put them in power.”